What’s at the Core of Yo-Yo Weight Loss and Gain?

Posted on September 2, 2013 by Dr.Sherry Buffington

Q – I have a question about dieting.  I have lost and gained 1000 to 2000 pounds in my lifetime.  I am either gaining weight or I am losing weight.  It seems that a healthy mind and body should know what to eat, how much to eat and when to eat, but that doesn’t seem to be the case for most people.  If a person is eating the right things at the right time and in the right amounts it stands to reason that their weight would be right for their body type.

My question is, why are there so many overweight people and does body type, metabolism and the ability to manage weight well have any connection to personality or is it more about mental or emotional programs?

A – There is evidence that body type and personality are correlated to some degree, but the lines are not as clear as some would like us to believe. It is unlcear whether life experiences shape the body or the body type shapes life experiences since both occur so early in life.

All babies come into the world looking pretty much the same as far a body type goes. The shaping begins to occur around age two, which interestingly is about the age when children begin to buy into the beliefs of the significant people around them (parents, siblings, teachers, ministers, etc.).  Babies are also pretty much the same as far as their preference for gender related activities go (see my blog post on gender). As children grow older, they tend to prefer one behavior or activity over another. This is in part due to their innate personality and in part due to the world they grow up in.

Let’s take a few examples and see how they relate to personality. Commander personalities are naturally bold and driven to accomplish so it is not uncommon for  those with Commander as a dominant or strong secondary style to enjoy athletic competition.  It is also not uncommon for them to have the body type known as mesoporph (which is a sturdy, muscular body type where the chest tends to be more prominent than the belly). In this case we could ask, does the innate drive to achieve create the muscular body or is the muscular body part of the Commander package?

Another example would be Organizers who are by nature introverts and more driven to be precise and get things right than to achieve in sports, or anything else not considered to be of a serious nature. Organizers, especially True Organizers who don’t have much influence from their secondary style, often have the body type known as ectomorph (which is a thin, wiry body without a lot of muscle definition). Organizers prefer things that require deep thought, such as science, math and engineering. Unless Commander is their secondary style, they aren’t too driven to compete in a physical way. So here, as with the Commander types, the question is whether the body type is a result of behaviors or of genetics.

The two feeling styles, Relater and Entertainer, often have the body type known as endomorph (fleshy, low muscle definition, belly tends to be more prominent than the chest). This may be due to their focus on people rather than physical activities and, perhaps to their love of exploration and unique experiences, which might include experiencing different kinds of food.  Entertainers and those with Entertainer as a strong secondary style also love adventure too, which can keep many of them quite active. This often takes the form of traveling or gathering experiences, rather that of extreme sports unless Commander is their secondary style.  In that case, they tend to be real daredevils, and tend to lean more in the direction of the mesomorph body type.

Here is an Illustration of the Body Types 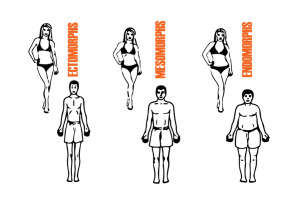 More certain, where it comes to weight management and fitness, is whether the core issue is programming or genetics.

There is no question that it is mental programming and the choices such programming leads to that creates the conditions under which we do things that are not in our best interest.

As the developer of the Rapidly Accelerated Mind Patterning (RAMP) Method and the originator of the CORE MAP assessment, I have worked with people at both conscious and subconscious levels for years and I have found 100% of the time, when there is an issue that is tripping people up, the source is subconscious programming. And, as soon as the source cause is removed, so too is are the choices and behaviors.

Most of the programming goes way back even farther than we can even begin to remember consciously. Take for example, the man whose mother intended to nurse him when he was born and diligently tried for almost two weeks before discovering that she was not producing any milk. He cried all night the first few weeks of his life because he was hungry and that event shaped his experience of food for the next 55 years.  This was discovered during a RAMP session and once the issue was resolved internally, it automatically resolved externally.

All failures are due to one or both of just two things; internal programs or lack of know how (external knowledge). In the information age we live in, having weight issues is certainly not due to lack of information. The information is everywhere and you can learn just about anything you need to know for free. The problem in every case I have ever seen is internal programs.

The problem with the information part is that there is a lot of false information out there and unless people are aware of what is true and what is not, they can think they are eating right and not be. The food and drug administration is appallingly lax in what it allows food manufacturers to claim. For example, a bakery can claim bread is “whole wheat” if it has just 7% whole grain flour in it. A food manufacturer can claim a food is “all natural” even if it has a ton of refined sugar or refined flour in it because the FDA considers sugar and flour (even the refined stuff) natural ingredients.

So part of a weight loss program would need to be educating people to read labels and know what “foods” to avoid. For example; for years manufacturers filled food and even created “food” (margarine, for example) with hydrogenated oils, which are artery-clogging, heart-stopping transfats, and no one knew to avoid them. Healthy eating advocates like Dr. Andrew Weil helped to expose that and now manufacturers have to report transfats in food. Many people are still are not aware that transfats are a problem and continue to consume food containing them.

Learning what to eat and what to avoid is easy to do, but first you have to know there is a need to learn. Most people trust manufacturers to produce good products and to tell the truth about them. When you start researching nutrition facts and reading labels however, you discover how far from the truth that is. Foods are manufactured for shelf life, not for human health. They are so full of chemicals and processed ingredients that even a bug won’t eat them, and let me tell you, if a bug won’t eat something, neither should a human.

There a program on television called Extreme Weight Loss where a trainer, Chris Powell, takes an obese person and helps them lost a hundred or more pounds in a year. Every single one of the people he works with has an emotional reason for eating which is not addressed in a way that removes the core issue. I would love to know how these people fare after Chris Powell steps out of the picture. I suspect that within three years 95% of the people he works with will have gained back most, if not all of the weight, and then some.

By getting to the core issues and updating the programs, excess weight, like so many other things in life we don’t want or need, falls away effortlessly and automatically.